Last Sunday there was a break in the weather so Oola and I headed out in Mom’s Memorial Prius to a show we had wanted to see in the Whatcom Museum in Bellingham WA — a very important and, as it turns out, memorable show of Artist Books.  We also wanted to hear a talk by Sandra Kroupa, Book Arts & Rare Book Curator at the University of Washington (UW).

You can click on any image to see it enlarged. 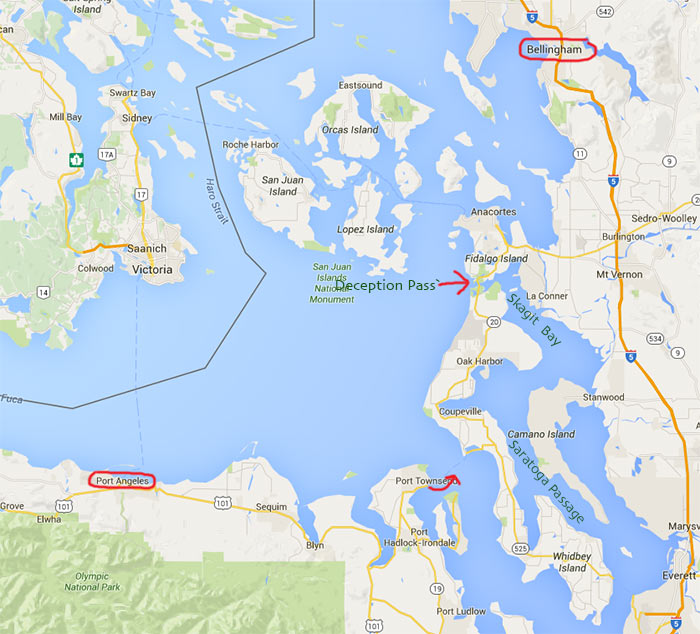 I say there was finally a break in the weather.  But both Oola and I were ecstatic about the snow in the Olympics — which we claim as our back yard.

Warm in the car, we drove to beautiful Port Townsend where we caught the 9:30 ferry.

Oola had never ridden on a ferry before and was fascinated that this one has a helm in the front AND in the rear.  It never has to back up.

Here we are, packed in and watching the Cascade mountains in the rear view mirror.

Farther up Hwy 20 is a bridge that connects Whidbey Island with Fidalgo Island.  Beautiful and scary, built with the help of the Civilian Conservation Corps in a time when cars were both smaller and fewer.

The water is deep; the current can be very strong and very dangerous here.  And the whole area swirls with stories.

For example: why the curious name?  Oola is so glad you asked because she looked it up.  In 1792 George Vancouver, British captain of the Expedition to map the northwest coast, thought that the water swirling out of the pass was a river.  Understandable, as this is how it was described by earlier Spanish explorers.  After a couple of tries, sailing master Joseph Whidbey discovered that the pass led not to a dead end but to Skagit Bay and the Saratoga Passage. (see map above)  This was BIG.  And Vancouver was so delighted he named the island, which they had thought to be a peninsula of the mainland, after Whidbey.  Vancouver named the deceptive passage Deception Pass.  Of course, he could do that because he had just claimed the whole Northwest for the British Crown.

Another legend tells of Scotsman Ben Ure who smuggled drugs and illegal Chinese laborers.  The story goes that he and his partner, Pirate Kelly, would tie the men into burlap sacks to make it easier to toss them overboard should they be seen by U. S. Customs.  He eventually got caught and admitted to his evil deeds.  His island, just inside Deception Pass, still bears his name as does Deadman’s Beach where many of the bodies landed.

In the 1920s, before the bridge was built, if you wanted to get from Whidbey to Fadalgo Island you would hit an old saw with a mallet. All five feet of Berte Olsen would show up,  then she would either collect your 50cents and ferry you across, or not, depending on the turbulence of the water.

But I am getting off the track here.  For more about this fascinating place see www.thecoachmaninn.com/whidbey-island-deception-pass-book-chapter-1.html

Oola advises that this post is getting too long. She is sometimes very practical.  I will work on the Bellingham part tomorrow.